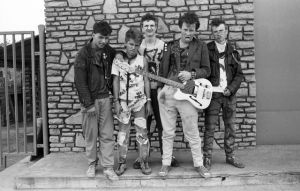 Tamás Rupaszov and his punk band Trottel in 1982 (he is the 2nd person from the right) Photo by: Tamás Urbán / fortepan.hu

Tamás Rupaszov is a cult figure of the Hungarian underground scene. He founded the bands Trottel, Marina Revue, and PaprikaPaprika, as well as the record company Trottel Records, which has now been in operation for more than 25 years.

Rupaszov was 15 years old when he became part of the Hungarian punk community, as a founding member of the band Rottens. The short-lived band replaced by the first incarnation of the band Trottel, terminated by the sudden emigration of their drummer. After that, Rupaszov founded the group Marina Revue, and, later, he also led the reformed Trottel.

He quickly went from his first experiment, Rottens, which mostly imitated the Ramones, to the experimental and innovative Trottel. The Trottel started in the first wave of the Hungarian punk music, and later it outstripped the conventions of the punk genre and became a very eclectic band. According to Rupaszov’s telling, he founded the band as a conservative punk, but he began interested in the new trends. He was listening to punk, hardcore, anarcho-punk music and worked with folk and funk elements in a more experimenter way. The band's members were not focused in a particular style, as he said: there were characters, there was a set of instruments, there was an energy, and some products were born from these who specifically covered that time of their life.

The Trottel soon gained fame both domestically and abroad. At the end of the 1980s, Rupaszov toured in several countries, while tirelessly building international punk connections and copying and distributing cassettes with recordings of music by Hungarian underground bands. The band Trottel - with a permanently rotating roster and often different names - is active since the ‘80s. In the 2000s, the Trottel Stereodream Experience had only one original member, Tamás Rupaszov.

Tamás Rupaszov and his punk band Trottel in 1982 (he is the 2nd person from the right) Photo by: Tamás Urbán/ fortepan.hu

Rupaszov also founded and edited the fanzine of the legendary club Fekete Lyuk (Black Hole Club), Lyukság (Holey Things) with László Távolodó Marton. Fekete Lyuk was also the place where Rupaszov was persuaded to launch Trottel Records not as a non-profit organization, but as a company. However, Rupaszov had begun distributing audiotapes long before that, in 1986, in the context of chain letters. Thanks to these letters, Rupaszov could acquire a lot of cassettes, fanzines, and posters from all over the world. In return, fans also started sending recordings containing a selection of tracks from Hungarian underground bands. These were the first so-called “Pajtás daloljunk” (Let's sing, pals) cassettes, which they also started to distribute during concerts to cover the costs of production.

This initiative was the first step towards Trottel Records, which could only take a legal form in 1992, after the regime change. Like its founder, the record company is quite eclectic, and the spirit of Black Hole had a great deal of effect on it: it intended as a place where people could do what they wanted to do and a place which provided space and opportunity for new, innovative, and enthusiastic bands. It was the first independent music record company in Hungary.

As Rupaszov mentions, he fell into the "do it yourself" Europen punk movement what was very inspirational for him. He said in an interview that he played the guitar since he was 14, but he was enthused by the whole activity together: music, organizing, publishing, and distributing. We account him also as a critical figure in the activating and documenting of the Hungarian punk scene in the 1980s.