Krzysztof Penderecki is a composer and conductor. Born on 23rd of November, 1933, in Dębica. In the history of 20th century music, his career stands out for his fast rise to the top. 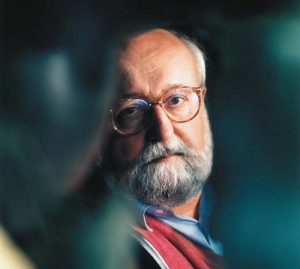 Krzysztof Penderecki was born in Dębica (in yiddish – Dembitz), a town in south-eastern Poland, in 1933. Before World War II the town was mostly inhabited by Hassidic Jews. He comes from a multi-cultural family with Armenian-German-Polish roots. His grandfather was a German evangelical; his grandmother came from Stanisławów (now Ivano-Frankovsk, Ukraine) and was Armenian. The composer told the Polish Radio:

"It’s a strange thing that this music, which I had in my ears then, now returns. In two of my pieces klezmer music came back in a way in which I was aware of it – the Sextet (2000), and even the Concerto grosso (2001). I most likely heard motifs like these as a child."

He started his musical adventure with private piano lessons but quickly grew tired of them. His affection for music was born when he saw his father’s violin. He was taken by the mystery of the violin, by the difficulty of playing even one clear note. Penderecki desired to become a virtuoso and practised Bach’s sonatas after school. In junior high school, he founded a band and started bringing Dębica’s musical scene to life. He soon went to Kraków to study composition.

Krzysztof Penderecki studied composition privately with Franciszek Skołyszewski, and then, from 1955-58, with Artur Malawski and Stanisław Wiechowicz at the Academy of Music in Kraków. In 1958, he began lecturing in composition at his alma mater, and, in 1972, he became a professor there, also serving as rector until 1987. He lectured, too, as an assistant professor in Essen at the Folkwang-Hochschule (1966-68) and at Yale University (1973-78).

When the results of the second Competition of Young Composers of the Polish Composers' Union were decided in 1959, it turned out that Penderecki's compositions (submitted under different pseudonyms) had won the first, second and third prizes for his Strophes (Strofy) for soprano, voice (reciting) and ten instruments (1959), Emanations (Emanacje) for two string orchestras (1958-59) and for his Psalms of David (Psalmy Dawida) for mixed choir, string instruments and percussion (1958). At that time, Penderecki was an unknown 28-year-old assistant professor in the Composition Department of the State Musical Academy in Kraków. The German publisher, Herman Moeck, took the score after Strofy was performed at the Warsaw Autumn International Festival of Contemporary Music that same year. The piece was soon being performed all over Europe, and Penderecki received a commission from the famous festival in Donaueschingen.

In 1960, he composed a piece for 52 strings entitled 8'37" (the duration of the composition), for which he received a prize the following year from the UNESCO International Rostrum of Composers in Paris. The work is now known as Threnody for the Victims of Hiroshima (Tren Ofiarom Hiroszimy), and is played all over the world. Krzysztof Penderecki thus became a leading representative of avant-garde music. At the time he said:

"All I'm interested in is liberating sound beyond all tradition."

His work Fluorescences (Fluorescencje), first performed in 1962 in Donaueschingen, confirms this. In addition to the instruments of the symphony orchestra, Penderecki introduced a large and experimental percussion section including a sheet of metal to imitate thunder, pieces of glass and metal scratched with a file, rattles, an electric bell, a saw, a typewriter and a siren. The traditional instruments also sound strange, because they are played in unconventional ways. In 1966, in Münster, the premiere performance of Passion According to St. Luke (Pasja według św. Łukasza) took place. With this work, Penderecki balanced the radicalism of the avant-garde with more conventional harmonics. Penderecki once said:

"It is not important to me how the Passion is described, whether as a traditional or as an avant-garde work. For me it is simply one that is genuine. And that is enough." 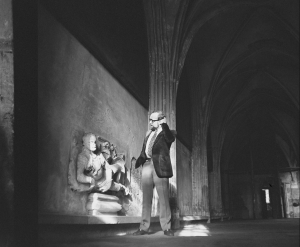 He wrote his first symphony in 1973. The preview took place in Peterborough under the composer's own baton and was performed by the London Symphony Orchestra.

My 1st Symphony – said Penderecki in 1995 – was written in 1973 when I was 40... I attempted to summarize my 20 years of experience – a time of avant-garde, radical searching. And yet, this symphony was a sum of what I, as an avant-garde artist, could have said by that time. Four symmetric parts: Arche I, Dynamis I, Dynamis II, Arche 11 – reflected my will to reconstruct the world from the scratch. Great destruction – according to avant-garde logic – expressed a big need for a new cosmogony (K.Penderecki – Labirynt czasu, Warsaw 1997).

In his subsequent symphonies Penderecki distanced himself from the avant-garde language and ceased to experiment with sonorism. In Symphony no. 2 (subtitled Christmas Symphony, and containing a short quote from the Silent night carol); Symphony no. 3 was often compared to Antoniv Dvořák’s works; Symphony no. 4, called Adagio, is a great commentary on the idiom of a symphony. It seems that such a synopsis of his symphonies shows the direction of his later works.

If it hadn’t been for a specific political situation, for Solidarność, I wouldn’t have composed Requiem even though this topic was very interesting to me for a long time. By composing Requiem I wanted to express my opinion, make a certain statement, and show where I belonged – said the composer.

Krzysztof Penderecki wrote music for one full-length feature film - The Manuscript Found in Saragossa by Wojciech Jerzy Has. This soundtrack was created in Polish Radio's Experimental Studio. Early music-like melodies are interweaved with the unsettling sounds of synthesizers and machines of the Experimental Studio. His music can be also found in Kubrick’s The Shining, Friedkin’s The Exorcist, The Mask by the Quay brothers and Shutter Island by Martin Scorsese.

"The activity of the composer never wavers and is worth admiring" – wrote Iwona Lindstedt on the website trzejkompozytorzy.pl – The composer is constantly realizing new projects (he plans a new opera and Symphony no. 6 ) and continues to present his works in cooperation with the world's most celebrated musicians and orchestras. For example, in February 2013 he had a great success with his Devils of Loudun in Copenhagen.

He has inspired a number of contemporary musicians across genres, such as Radiohead's Jonny Greenwood, who composed his 48 Responses to Polymorphia on the basis of Penderecki's own Polymorphia. In March 2012 the US-based recording label Nonesuch released Krzysztof Penderecki and Jonny Greenwood - a critically-acclaimed collaboration between the two composers. In August 2012 he received the Glocal Hero Award at the Transatlantyk Film and Music Festival, together with his wife Elżbieta Penderecka.

Pianohooligan (pseudonym of Piotra Orzechowski) released an album with his interpretation of Penderecki’s works from his avant-garde period, transposed to prepared piano and Fender Rhodes.

Maciej Fortuna and An On Blast create remixes of Penderecki’s pieces which have been used in feature films. 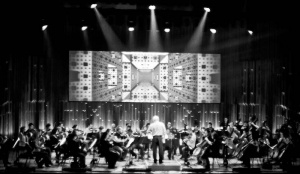 Krzysztof Penderecki worked as a professor at the Folkwang-Hochschule für Musik in Essen (1966-68) and at Yale University, U.S. (1973-78). In 1987–90 he was an artistic director of Kraków Philharmonic Hall, since 1993 he has been an artistic director of Festival Casals in San Juan, Puerto Rico and since 1997 he is the music director of Sinfonia Varsovia. In 1998 he started advising the Beijing Music Festival.

In 2013, DUX published a CD box set containing all of the Penderecki’s symphonies, conducted by the composer himself. It was a sort of a gift from this recording label for Penderecki’s 80th birthday. The International Classical Music Awards awarded the box in the ‘Contemporary Music’ category.

"When I conduct my own compositions I can try to guide each part of the piece to the ideal, which I created in my head when I composed it (…) Only I know how long each part should last, how quickly it should develop."

He has been granted honorary doctorates from the universities of Rochester, Bordeaux, Leuven, Washington, Belgrade, Madrid, Poznań, Warsaw, Buenos Aires, Glasgow, Kraków, Pittsburgh, Luzern, New Haven, Saint Petersburg, Leipzig, and Seoul. He is an honorary member of the Royal Academy of Music in London, the Accademia Nazionale di Santa Cecilia in Rome, the Kungliga Musikaliska Akademien in Stockholm, the Akademie der Künste in Berlin, the Academia Nacional de Bellas Artes in Buenos Aires, the Académie Nationale des Sciences, Belles-lettres et Arts in Bordeaux, the Royal Academy of Music in Dublin, the American Academy of Arts and Letters, the Academia Scientiarium et Artium Europaea in Salzburg, the Institut for Advanced Study University, Bloomington, The Kościuszko Foundation in New York, the Gesellschaft der Musikfreunde in Vienna, and the Academy for Performing Arts in Hong Kong. In 1997, he published a book entitled Labirynt czasu: Pięć wykładów na koniec wieku / The Labyrinth of Time: Five Lectures for the End of the Century (Warsaw: Presspublica, 1997).

At the 2013 Grammy Awards Antoni Wit received the award for Best Classical Compendium category for the recording of the Polish National Philharmonic Symphony Orchestra's performance of Penderecki's Fonogrammi, Horn Concerto, Partita and The Awakening of Jacob and Anaklasis.