"Punk in Poland" by Aneta Panek 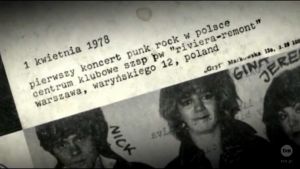 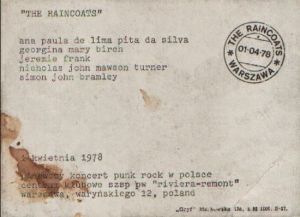 The Raincoats, with Ana da Silva on vocals and guitar, Gina Birch on vocals and bass, and Nick Turner – the only man in the group – on drums, were a hypnotising and exhilarating apparition in this context. Emissaries from the West, they came from the original London punk rock scene – an exceptional event in isolated Poland, a country hungry for new input and wild energy. This event sparked the blaze of Polish punk.

Punk in Poland, from its very beginning, was deeply connected with the arts; it was a go-between of subculture and high culture, of avant-garde art and the new energy of punk.

Gallery Remont, in the student club Riviera-Remont and under the auspices of Henryk Gajewski and Piotr Rypson, was soon to become the epicentre of the newest art and punk explosion.

Although the roots of punk in Poland can be traced back much earlier, this was the inauguration. In the punk-artist fanzine Post2 from 1981, Piotr Rypson compares punk to the activity of the Futurists and Dadaists from the beginning of the 20th century. He connects punk with two decisive moments in art history: the publication of the Futurist Manifesto by the Italian poet Filippo Tommaso Marinetti in 1909 in the Italian newspaper Gazzetta dell’Emilia in Bologna, and the birth of Dada in Zurich in 1916, which spread to Berlin shortly thereafter, celebrating the anti-art later embraced by Surrealism. He describes punk as “a new tendency of an arrogant, non-conformist attitude of anti-art, a lap in the necessary and dramatic process of renewing culture."

Let’s focus on the moment of the outbreak of punk in Poland and the invention of new subversive forms of reaction to reality, based on alternative and primitive means of communication, on self-organization and on do-it-yourself ethos. In the process of cultural renewal described by Rypson, Poland had been running a long, desolate lap, trapped in an economic crisis and political isolation, with no freedom of expression due to the pervasive control of public life by the Communist regime. Information was distributed in the so-called third circuit only; through illegal pamphlets and zines, printed and copied in the underground to bypass censorship, and through Radio Free Europe. Self-made concert recordings, bootleg cassettes and vinyl records, as well as smuggled magazines, were the only ways to keep in touch with Western Europe’s punk culture. As early as 1977, on Polish radio’s “Trójka” (Channel 3), courageous music journalists Marek Gaszyński and Wojciech Mann would occasionally play Eddie and The Hot Rods, the Sex Pistols and the Stranglers. 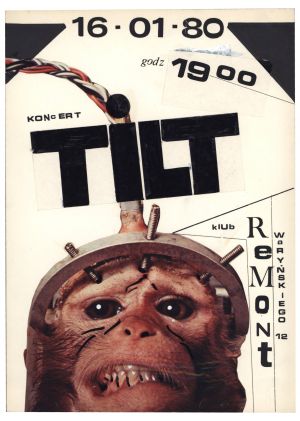 It’s thanks to fans that there exists any trace of the first Polish punk bands and their early activities, documented through self-made recordings from illegal concerts and rehearsals in basements or underground galleries. Posters, t-shirts, fanzines and artzines soon abounded, graffiti appeared, spontaneous demonstrations took place in the streets, and the most avant-garde underground exhibitions took place in churches, which back then served as off-spaces. Polish punk was born as an act of rebellion against the oppression of the Communist regime. There was an intransigent demand for freedom, self-expression and commitment at work and it expressed itself through a protest of youth against power, dominating aesthetics, and political and moral standards. Polish punk scene organizers worked together with the artistic avant-garde and political opposition, finding shelter within the Solidarność movement. In the beginning of the 80s, Solidarność and punk in Poland had one thing in common: an anti-totalitarian and social character. The Solidarity movement gained significant popularity in the Western world among artists and fans of punk rock. In 1983, for example, British band Angelic Upstarts released a song dedicated to Solidarity, an homage to the workers protesting in the FSC Lublin and WSK Świdnik factories in July 1980 and the Gdańsk shipyards in August 1980, the first to openly stand up to the Communist regime.

Polish punk bands had begun to emerge in the late 70s, some of them playing covers of Western songs. The Walek Dzedzej Pank Bend (led by Cyril Daniki aka Walek Dzedzej), the very first known Polish punk band, was founded in Warsaw in 1977. They played punk and hard folk and were also involved with experimental theatre. Soon after, the Trogs (future Deadlock) were founded in Gdansk. Active later on in Warsaw as well, they had a loud reggae-punk sound with a primitive approach and raw energy that remains brilliantly unsurpassable. KSU, a band from the south-eastern Polish town of Ustrzyki Dolne, stands out as an absolute eccentricity, playing original experimental punk created in the seclusion of the Bieszczady Mountains, not far from the Ukrainian border.

One of the most significant Polish punk groups started to play in 1978 in Warsaw, first as their earlier incarnations Skull and the Crossbones, Furious Dogs, and the Boors, and then finally as Kryzys (Crisis). They would later merge with Tilt (first named the Artists), a Warsaw band founded in 1979 that played a groovy version of Polish punky reggae, to form a group known later as Brygada Kryzys. Other bands emerged: Deuter, who made powerful and progressive hard-core punk songs; Tzn Xenna, with a straightforward street-punk style; Dezerter, who played hard-core cutting-edge music; Nocne Szczury; Speedboats; Poe’rocks; Deutschland Prostitutes; and girl punk bands Kontrola W, Bikini, and Atak, the first punk rock group to have a female vocalist – "Jola" Pola Mazur. Pola, along with former Deadlock drummer and Tilt member Jacek “Luter“ Lenartowicz later formed the group Białe Wulkany (White Volcanoes) and published a fanzine of the same name. It is impossible to name all of the artists and groups, but all of them were of great relevance for this rough and flamboyant time in the history of Polish punk.

The sound and aesthetics of Polish punk developed into an alchemical mixture of new-wave, punk, hard-core rock, Dada-noise, experimental sounds, sawing guitars, dark grooves, ska, reggae and dub of diverse traditions, along with dark, irreverent, hilarious, and often brilliant lyrics thematising girls and adolescence, hell and the devil, and referring to Oscar Wilde, Franz Kafka, William Golding and the Bible. 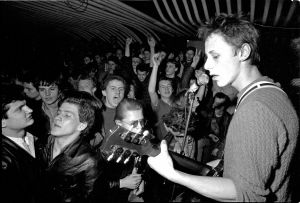 Do-it-yourself fashion, posters, publishing, music recording and distribution flourished, and the basic tools of this new creativity were scissors, glue, newspapers, magazines, tape recorders and typewriters. Inspired by the exchange of music, zines and correspondence with Western punks, Polish punks started to create their own counterculture. The second drummer of Deadlock, Maciej “Magura” Góralski (also a Walek Dzedzej Pank Bend member), travelled to London, where he was able to gather interviews with groups such as PiL and the Stranglers for his fanzine Turysta. Tilt member Luter spoke fluent English, read and wrote lyrics in English and had regular correspondence with punks in the UK. Dezerter member Robert Matera was an avid reader of Western fanzines, and his brother Zbyszek was friends with Piotr Wierzbicki, who later created the fanzine QQRYQ. 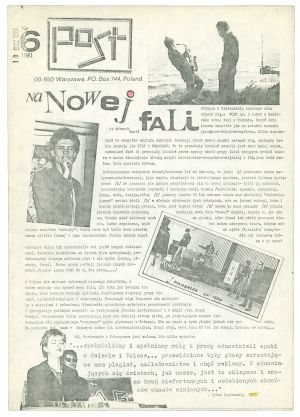 The first fanzines and self-made posters began to appear at the turn of the 70s and 80s, with Post, Tilt, Białe Wulkany, QQRYQ, Szmata, Nie daj się złapać, Mać pariadka, Pasażer, and Garaż. Since everything was lacking under Communism, the do-it-yourself punk aesthetics were even more rough and knocked together in Poland than they were in Western countries, but it was an interesting new kind of communication in terms of originality, imagery and message.

One of the first Polish punk zines, Szmata (“Rag”), appeared in Warsaw in 1979. It was created by Anna Dąbrowska (Ada Lyons), Stefan Mikulski (Mikes), Julian Rokicki (Vex), Jurek Woszczyński (Juras Zero), Tomek Wisńiewski (Majonez), who translated from English, and Robert Brylewski, who illustrated. The logo was based on the banner of the Communist party’s main daily, Trybuna Ludu. The illegally-made copies were distributed among friends in the Remont Gallery.

QQRYQ, created by Piotr Wierzbicki (Pietia) in Warsaw in 1985, was one of the most representative zines of the second wave of Polish punk. Pietia wrote poetry and stories, while establishing a place for discourse on feminism, animal rights, and anarchism.

Street art and graffiti were one of the primary strategies of communication adopted by punk.

Nie daj się złapać, a zine dedicated to the nascent Polish graffiti scene and created by Grzegorz Kmita (Patyczak) in Poznań, was was one of the most original underground publications in terms of graphics. It contained instructions for graffiti making and the use of stencils, as well as tips on how to refill a spray tin, which were very expensive at that time in Poland.

By 1989/90 a zine madness had taken hold in Poland, with hundreds of titles available, covering topics such as anarchism, feminism, ecology, capitalism, the free market, prostitution, advertising, the judiciary, the constitution and freedom of speech.

Polish punk developed very distinct and moneyless strategies of direct action and resistance, in which everyone could participate creatively. Ultimate freedom was the postulate, as well as do-it-yourself ethos. Punk in Poland remains one of the most interesting subcultures, because it was truly self-made and charged with a political message. It was created with no support from cultural institutions, music promoters, or record labels, and against censorship and under Secret Service surveillance. The no future in Poland in the time of martial law had a different meaning than in the West; it was much more austere, urging, hopeless and apocalyptic.